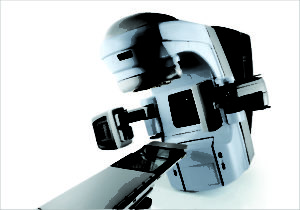 I called her “Kali” for the Hindu goddess of destruction. She had one job – killing cancer cells.

I was far more worried about the side effects of chemo than radiation, in retrospect I think it’s because nearly everyone glosses over just how awful radiation is going to be. Yeah, sure, the treatments don’t hurt and they’re over in a flash. But the damage builds and builds and builds until it destroys you along with the cancer.

The word I got from my radiation oncology team was that the roughest radiation treatments are to the pelvis and the head/neck. All those soft mucous membranes….  I had a number of doctors and nurses remark that I had taken excellent care of my skin throughout treatment so I really want to share my skin regimen and products that I found useful. Pelvic radiation sucks, no two ways about it. I still can’t believe my radiation team didn’t know about things like VSL#3 or the toilet seat bidet. I also learned a sad lesson on speaking up early and often, which caused me to suffer more than I should have.

*Note that these are affiliate links and as an Amazon Associate I earn from qualifying purchases, it isn’t much but it helps with hosting fees for this site.

Things that did not work for me:
Wipes of any kind – it didn’t matter if they were “water wipes” or “sensitive skin” baby wipes, they all stung my damaged skin. What saved my raw tushy was the bidet below and buying a set of 8 soft hand towels from Target. Those enabled me to stay clean with minimal abrasion to skin.

Transfer Point Beta Glucan – I took 2,000 mg daily starting the day of my diagnosis. Beta Glucan is well documented to have radio-protective properties. It helps your healthy cells survive radiation and helps your immune system rebound faster from being nearly obliterated by cancer treatment.

Hand Towels – as noted above, wipes didn’t work for me and as often as I was doing clean up detail I needed something I could wash regularly and rotate through. The hand towels were new and soft, I could wash the lot of them every other day. I bought mine from Target but any place will do – just don’t stint on quality,  you’ll regret it after a few washes if you do.

Toilet Seat Bidet – I was perusing a forum somewhere and another patient mentioned this product. WHAT A LIFE SAVER/BOTTOM SAVER. I cannot emphasize enough how much you need one of these if you’re having radiation to the pelvis. A little creative squirming on the seat and you can wash everything. Pat dry afterward with the hand towels. This baby installs in less than 15 minutes with just a wrench. It connects to the incoming water supply of the toilet and fits right under the screws that hold the seat on. You have to unscrew the seat first to slide in on. To quote someone else from the reviews – don’t turn the dial all the way up unless you want a high colonic. There are other models out there but really for $25 this is one of the best spends you’ll make to get you through treatment.

Cetaphil Liquid Soap – one the gentlest on the market, your radiation center probably recommended it. (Costco has the best price on this…)

I was warned early on by the radiation team that I’d experience radiation induced diarrhea and they were not wrong. About midway through treatment I started having issues and through research found this amazing stuff called VSL#3. There was a study done https://www.ncbi.nlm.nih.gov/pmc/articles/PMC4065928/ that clearly showed efficacy of VSL #3 for radiation diarrhea. I ordered a bottle of capsules and took 2 a day. No more diarrhea for the rest of my treatment. I can’t guarantee it will work for you for but it was gold for me.  Make sure whomever you buy from stores and ships the product cold.

Calendula Cream – helped soothe irritated skin early in the treatment schedule, I rotated it with other products later on.

Aquaphor Healing Ointment -I bought this in both the large tub and the smaller purse-sized tube. I alternated it with the MediHoney and Calmoseptine to protect skin and especially at night to provide a barrier.

MediHoney – I started using this about midway through when the skin damage was becoming acute. I would slather a bunch on right after my radiation session in the bathroom. Sometimes I’d sleep over night in it but it does get sticky.

Calmoseptine Ointment – LOVE this product, I lived in it over the weekends to heal my skin. The doctors said not to use it during the week when I was having regular session as the zinc clings to the skin somewhat can increase the radiation dose to the skin.

Desitin – smelled terrible, I pitched in the trash after two uses.

A & D Ointment – tried this exactly once and it smelled as awful as the Desitin so into the trash it went.

Silver Sulfadiazine Cream – this worked off and on for me. Sometimes it was a blessing and sometimes it just made me very itchy and irritated. (Prescription only)

I also put an old, ratty set of sheets on the bed. Between all the ointments and the discharge coming out of your damaged body anything nice will get ruined.